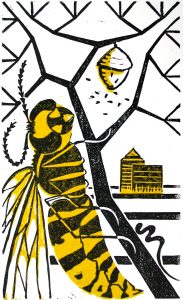 Walking home yesterday evening across Walthamstow Marshes I was attacked by wasps. They came from nowhere went straight on the attack, stung the arm I took my hat off to beat them away and was stung on the head, there were visions of me jumping in the canal to get away from them. I should have known something was up from the antics of the couple in front of me, lots of arm flapping coat dropping and running. But there was not a lot I could do once they had homed in on me.

I must admit that I’ve never come across wasps so violent before, I’ve always found them to be drowsy in the autumn, getting in your porridge and jam sandwiches, and getting stroppy when you flick them away, not just diving in to the attack because you are passing. But that is what happens in the declining part of the year, things start winding down for the winter, the wasps will soon all be dead apart, from some queens who will hibernate ready to restart wasp production in the spring, I guess the rest have all got the hump.

Spiteful little bastards think their end has come so they are attacking all and sundry. Later to day the Labour Party leadership election results will be announced. A situation brought about by a large group of rightwing, Blairite, MP’s are fearful that they will be deselected, have attempted to deselect their leader, their worry is they are loosing their home. Also terrified that the LP is moving to the left the establishment got in behind them, with newspapers, the BBC and various pundits piling on tales of woe should Corbin win.

On the other hand there has been a very popular response to the Corbin leadership with thousands of people joining the Labour Party because they smell the possibility of a decent opposition to this rotten Tory government. An opposition that talks about real justice for working people, not the mealy mouthed Tory light that we have been fed for the last few years.

The problem is there are too many LP MP’s who are tied into the system they should be opposing, all they are prepared to do is tinker around at the edges when they should be pulling the whole rotten edifice down. That would give real hope.

It’s the same at home, I’ve harvested the garden and called to plumber to service the central heating. Soon the radiators will be running hot, I’ll be swapping the polo shirts for the thermal vests, and stew will be replacing the salads. I don’t really have the hump, I try to take an optimistic view of life, given the crap that seems to fly around this can be a challenge at times, so I’ve going to try to vent a bit on line, sorry folks, but you don’t have to read it.