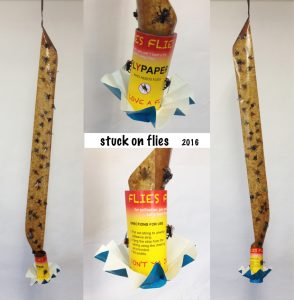 The humble fly is a great boon to society, but like all boons it has a few busts. There are lots of flies, an estimated 1,000,000 species of mosquitoes, gnats, midges and others, although only an eighth (about 120,000 species) have been studied. It is one of the major insect orders both in terms of ecological and human (medical and economic) importance. There are about 17 quadrillion flies in the world.

The origin of this piece was one particular year in the studio. The studio opens onto the back of a restaurant, the owner was very penny pinching and did not empty his bins as often as he should, so every time they were opened to put more waste in a cloud of black flies would rise up. We are on the first floor so they would then come straight into the studio.

We tried all sorts of things to get rid of them pennies in bags of water, extreme violence, rolled up copies of Socialist Workers and file papers, available from the pound shop. In the end a fly curtain on the door was the most effective remedy, subsequently the owner brought in a manager for the the place and the problem disappeared. But for most of that year we were inundated with flies, most of which ended up stuck on fly papers, which are very indiscriminate, they don’t care what they kill.

I would like to thank Cris Thompson for the 3D printing of the fly bodies, he can be found at www.3dmigos.net .

The words on the piece read;

for pollination, poo and promiscuity, you can’t beat a fly. Let’s hope they stick around a long time.

DON’T YA JUST LOVE A FLY

So there you have it another little tribute to the underdog, the struggling masses, those that make up the bulk of the world around us but have little say in its running. Do you see a theme here? When we listen to the radio or watch the television we are are inevitably shown a world that is run for the benefit of the few, where their needs and wants are expressed as the most important things and that the needs and wants of the majority do not mater and cannot be afforded. We are taught to look up at the wonderful achievements of the rich, why, they are rich for heavens sake, that in itself is a measure of success.

The destruction of the environment, global warming, the immiseration of the vast mass of the people, destitution caused by war and the subsequent refugee crisis, which is small by comparison the the mass movement of people that will be caused by global warming. None of this maters because profit is being made by a few. Arms are being sold, oil is being drilled and fracked, and more land is stripped for farming. The poor are trampled on and pushed aside in the clamour for profit.

But it does not have to be like this, we are many, they are few, we have to organise against this rotten system where ever and how ever we can. We have to protect the poor and dispossessed, raise the masses to control society and not be controlled by it, thats what democracy should mean.

So in the words of Alfred Hitchcock’s Psycho, “Let them see what kind of a person I am. I’m not even going to swat that fly. I hope they are watching… they’ll see. They’ll see and they’ll know, and they’ll say, ‘Why, she wouldn’t even harm a fly.”