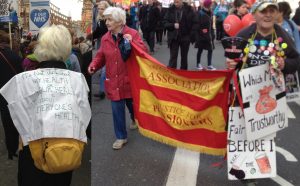 It is a universally known but seldom acknowledged fact the hospitals, like doctors waiting rooms are full of sick people. But I did not realise the same is true for support the NHS marches, I assume that is why have been full of cold since last Saturday. It is just a cold, my head is full of snot, the tinitus is ringing away as both ears are blocked, I’m coughing through the night, and I’ve got headaches that burst into migraines, but its time for it to go away now.

Apart from that, what a great demonstration, I would have preferred the age profile to be a little lower, but for most people, like pensions, the NHS impinges most on your life as you get a little older. Its having children, dealing with old people and getting old that bring the necessity on the NHS close to you. That aside it was really well attended, it let people know they are not alone in fighting for the NHS and it let the vicious Tory shits in the government know we are fighting for it.

They are dismantling the welfare state, and the really annoying thing is that the right in the Labour Party won’t oppose them, get off of your fat lazy arses get behind Corbyn and build a movement you dumb fucks.

Enough of that, this bloody cold is making me miserable now.

On the work front, things are progressing, slowly, there has been a change in my output of work, both in substance and subject. I seem to be being a bit reflective. I’m trying to complete work started years ago and abandoned, for all sorts of reasons, as well as looking at some new stuff. So you will find sensuality among the slugs and flies, and some politics in cardboard.