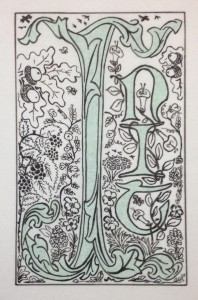 Well this has taken a while. I thought the recovery from my cancer was going well until;

…after a few random symptoms they called me in for a brain scan. This didn’t make me feel to good. But none the less we are still here, and the the result was OK. It turned out my thyroid way not performing well, I was over medicated with pain killers and the cancer triggered macular degeneration, more of which later as there is no cure.

So anyway after a false start I’m back to work. Which for me meant doing some work then worrying about the website later, so now its time to worry about the website. From now on the blog will be kept up to date on a weekly basis and the so will the other content, allowing for the backlog to be got through first.

I had a very illuminating Art Trail this year. Fearing for the future I put up a mini “Grappling with Gropius” exhibition, mainly to get feed back, but also worrying that it is taking me far too long to get the show together. I enjoyed it, but I was a bit flabbergasted how many people had not heard of the Bauhaus, what on earth do they teach at art school nowadays! Still the feed back was useful.

I’ve also been working at Inky Cuttlefish at least one day a week. This has helped me get on with some work that I stopped mid-cut in late 2011. Age shall not weary him but it dose rather harden the lino and the use of Annas’ hot plate softened the lino enabling me to cut the bloody stuff, and use up some ancient stocks of it. That all said I really don’t have the stamina I used to have so my work output is reduced, hopefully the quality will improve, ha ha ha.