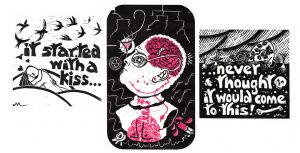 The Epstein–Barr virus (EBV), is one of eight known human herpes virus types, and is one of the most common viruses in humans. It is best known as the cause of infectious mononucleosis (glandular fever), it is also associated with particular forms of cancer, such as Hodgkin’s lymphoma. for most of us it lays dormant in the body.

As a spotty adolescent I had glandular fever, somehow I developed it on a walking holiday in Scotland and was taken in to St Anns hospital and isolated on my return. Some years later I developed Hodgkins lymphoma, I was no longer an adolescent, though still spotty.

All this was put down to the Epstein-Barr virus, where I got it I don’t know, I may have been infected with it, I may have been born with it, but somewhere on the ancestral line it was acquired. This led to a chain of events that have been dwelling on my mind, this poorly created triptych of linos is an attempt to expunge the events from my psyche.

In 1980 I had my spleen removed and was given radio therapy for the Hodgkins lymphoma. Whilst the removed my spleen the surgeon to a mixed grill set of samples from the surrounding organs.

Not too long after the treatment was pronounced a success I went down with an under-active thyroid, I took a while to sort out as my adrenal glands were damaged, probably by the radiation, and I had a thyroid antibody that the NHS did not last for. I was outside the normal in terms of diagnosis and treatment and it still has repercussions to this day when I have to explain to my doctor how the endocrine system works.

Everything boogied along OK until around 2010 the I started becoming unwell, it resulted in my being rushed into hospital in late 2011 with hypercalcemia. This it turned out was due to me getting a diffuse large B cell lymphoma, caused by the radio therapy from 30 years earlier. This was all turned around with chemotherapy, which include intrathecal chemo to the fluid around the brain.

As a result of the disease and treatment I have, macular degeneration, cataracts, tinnitus, spinal osteoporosis, and a calcified heart valve, but nothing overly worrisome, just a general feeling that my body was cracking up on me, going into decline. So life boogied along again, until in the last few years…

Well for the past few years I’ve been getting progessively short of breath, so I’ve started a new round of tests and explorations, all very exciting.

Probably too exciting as last year I had a mini stroke, even more tests and explorations, I like to get my monies worth out of the NHS. This was easily resolved by putting me on blood thinners and a statin substitute as I respond badly to statins. The consultant said “they do the same things as statins”, and she was right, I reacted badly to them and have had to stop taking them after a somewhat challenging period of depression and nightmares.

The lung function testing continued at a snails pace getting nowhere, until just before Christmas when I had to see a consultant surgeon, who as a Christmas present told me I had lung cancer, probably one of the two lymphomas I had previously has metatstised in to the lung, they would biopsy in the new year. A metatastisned lung cancer has a modal survival of 15 months.

The biopsy revealed that I do NOT have lung cancer but chronic pulmonary sarcoidosis. Which to cut a long story short they will not be treating as my lung function is passable, they will monitor until such time as treatment becomes necessary, the treatment is foul, steroids and immunosuppressants. They don’t no much about the disease*, they cannot cure it, just hopefully hold in check.

Ah I said so thats what the shortness of breath is all about, no the consultant said I don’t know whats causing that, try a new inhaler, and MOVE OUT OF LONDON.

So there you have it, I’ve tried to put it all into this little work, and now its time to stop worrying about the past illnesses and how I got here, I have to think about the future, how to get my breath back and can I replace the steroids with CBD ,turmeric, or some other anti-inflammatory.

There got it out of my system.

* Propionibacterium acnes is sometimes mentioned in connection with sarcoidosis, I only bring this up because Propionibacterium acnes type zappae was named after the Italian term “zappa” (meaning hoe) and as a tribute to musician Frank Zappa who wrote about “sand-blasted zits”. The unconventional behavior of this bacteria and its unique habitat caused scientists to immediately think of Zappa and name the bacteria after him. The age of P. zappae dates back to about 7,500 years ago, an age that reflects the early domestication of grapevine, which is associated with the bacterium.

Continue reading "you don’t remember me do you"

It is likely that the 45th POTUS, Donald Trump will be making an official visit to this country. A bigoted, racist, homophobic, misogynist deserves a warm welcome. I have put together couple of A3 poster/ placards for people to download and use as they think fit;