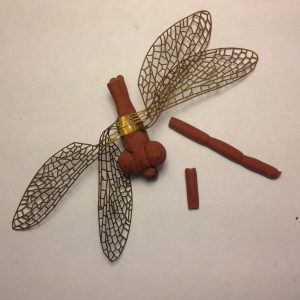 I’m a bit soft, I seem to have an over endowed sense of empathy. The silliest things on the tele reduce me to tears, the plight of other human beings reduces me to rage, the state of the planet makes me feel for future generations, I’ve a tendency to get a bit depressed which spurs things along a bit.

At the same time I see a world full of wonder, there are around thirty swifts wheeling in the sky above my garden, the purple runner beans I’m growing look so beautiful I’ve not picked them just let them grow, even the snails attempting to reduce my little patch of garden to a waste ground leave me in awe.

I think this is all reflected in my art, a combination of views on nature and the world we live in with a desire to change it for the better. For instance the four mobiles that were lent to the Barbican for display in one of the marquees at the garden party. 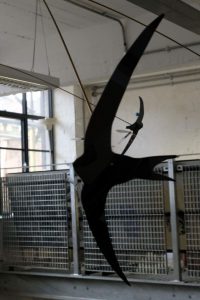 “Migration” a 4m diameter depiction of swifts wheeling around, the centre of which displays a map human migration underneath hang an upturned rubber dingy spilling out its cargo of people, all driven by a mirror ball motor,

“Life cycle” and “damsel” are similar, one has a dragonfly the other a damsel fly as its main feature, buzzing around a stylised stand of reed mace ( bullrush to the ill-informed ).

“Swifts” was produced by the children of Inky Cuttlefish’s Saturday morning art class, the made the swifts and I assembled forty of them into a mobile, light and fragile it was moved by the slightest breeze.

When I went to bring them home they had been demolished along with the marquee, bent twisted and trampled into the grass. Both of the swift mobiles can be repaired, the the other two can only be replaced. Twas a little upsetting. 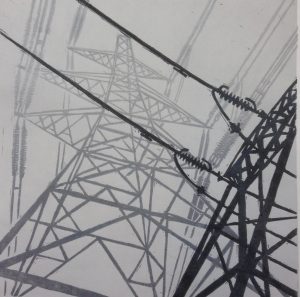 In other news I have finished a little lino, “snap, crackle, pop”, based on a walk on the river Lea at Dob Weir earlier this year, where the pylons were shrouded in mist and the electricity was creating a sense of magic. I’ve also finished a small sculpture “artists cannot stand aside”. Life’s not all bad.

In yet other news, I have now been informed by the chest clinic I have the lungs of a 89 year old. Which begs the question have they got mine, and if so can I get mine back, well as long as I don’t have to run to get them.